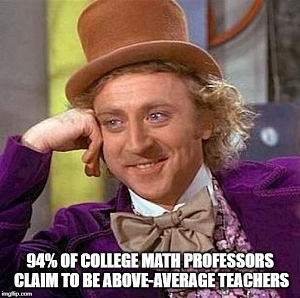 According to Russell Korobkin, “Psychological Impediments to Mediation Success,” 21 Ohio St. J. on Disp. Resolution 281, 287 (2006), 80% of professional truckers believe they are safer than average and 94% of college professors think they are above average.
Lawyers and litigants tend to suffer from the same fate–having overconfidence in their likelihood of success.  In fact, 44% of attorneys who were asked in one study to predict outcomes at trial were overconfident in their prediction of their success.  Goodman-Delahunty, “Insightful or Wishful: Lawyers’ Ability to Predict Case Outcomes,” 16 Psych., Pub. Policy & Law 133 (2010).  Most of my attorney friends who just read that statistic are thinking, “I would be one of the 79% who predicted my success correctly.”[1]

The Randall Kiser Study, released in the Journal of Empirical Legal Studies, found that parties who reject the last and best offer at mediation overwhelmingly regret the decision.  The study surveyed thousands of cases in California and New York over a five-year period.  It found that plaintiffs who rejected the last settlement offer and proceeded to trial do worse a whopping 61% of the time, while defendants did worse than their last offer 24% of the time.  In only 15% of the cases did both sides obtain a better result at trial.

All is not good news for defendants, however.  Although they seem to do better at predicting outcomes, the 24% of the time they are wrong ends up being much more costly to them.  Defendants who fail to do better than the Plaintiff’s last demand, ended up with a verdict that was on average $1.1 Million more than the Plaintiff’s last demand.  On the other hand, plaintiffs received on average $43,000 less than the last offer given before trial.

Mediators assist often entrenched parties who each have a greater belief in the value of their position than they ought to have, to reach a middle position. The uncertainty of a litigated outcome alone justifies considering alternatives to a litigated result.  Every experienced and honest litigator can point to cases they won when they didn’t think they had a chance winning.  They can also point to times when if there was any justice, they would have won, but lost.  There simply is no way to accurately predict with certainty the outcome of a litigated case whether decided by a judge, a jury, or an arbitrator.

Some studies suggest that 95% or more of lawsuits settle rather than go to trial.  Assuming that is true, your case seems destined to settle; therefore, why not resolve it now rather than later?  Doing so may save time, aggravation, stress, and money.  That said, mediation will not be an easy process.  At times, you may feel uncomfortable, pressured, and perhaps even emotional.  If the process were easy, the parties wouldn’t need a mediator’s assistance to settle the matter.  A mediated result gives you certainty without the risk of litigation.

[1] Attorneys are also not known to be terribly good at math.